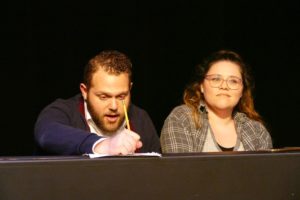 Congratulations to Will Lacker and and Dylan Glatthorn whose musical “Bittersweet Lullaby” is the week two winner of the 9th annual Players Theatre Short Play Festival – NYC 2019!

Bittersweet Lullaby is the story of two struggling songwriters live in the same apartment decades apart. In one magical night, their voices connect through time, and they begin a collaboration that leaves them forever changed.

The production was directed by Will Lacker and Dylan Glatthorn composed the music and lyrics as well as served as the Musical Director of the production. The show featured Paul Pilcz as Man and Michelle Dowdy as Woman.